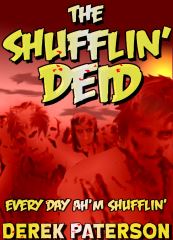 THE SHUFFLIN’ DEID
by Derek Paterson

Zombies, or reanimated dead persons, are generally not real. In popular films and television shows, they are portrayed by actors wearing make-up. However, should you encounter a zombie who is not an actor, remain calm. Do not attempt to engage the zombie in conversation. Retreat indoors and stay there until you are sure the zombie has gone away. Report the incident to the authorities using the emergency telephone number listed in the Scottish Government information leaflet titled, “How To Survive A Necrotic Reanimation Event.” If you follow the instructions you receive to the letter, you will probably be okay.

Back to my
Home Page
Top